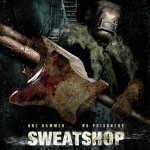 Oh naw! Hell naw! We done up and done it! We didn’t know if we would ever be a part of another episode like The Gallows episode. So much raw emotion, such strong opinions, such…rage; and here we are just a month later, doing 2009’s Sweatshop. In a Who Goes There first, we have a guest on the show that actually worked on the film. What the hell were we thinking?!

We’re very excited to welcome to the show, special effects badass Marcus Koch! Find out why Marcus almost walked off the set of Sweatshop, and the original vision for the film. We’ll also talk about our Frights & Pints charity event, cannibalistic grandmas, and our usual brand of chicanery. This is not an episode to be missed! He didn’t get out of the COCKADOODIE CAR! It’s the Who Goes There Podcast episode 47!