Oh snap! What’s this?! An episode a week early?! That’s right, jerks! We figured, “why should all those assholes at comic con get all the special treats?!” So we’re giving you an early episode, jam packed with the same ol Who Goes There shenanigans you love, plus a whole bunch of sweet San Diego Comic Con related news.

And what episode of the Who Goes There Podcast would be complete without a movie review? Hold on to your floppy parts, because this episode gets bananas! Usually we try to hide our feelings about the film until the actual review, but never have we hated a movie so much, never has a movie made us so angry, never has anyone used the f word more than we did while discussing the biggest insult to horror fans since Rob Zombie raped the corpse of Michael Myers, we’re talking about the found footage abortion that is…The Gallows.

We are now up against live, hostile targets. So, if Little Red Riding Hood should show up with a bazooka and a bad attitude, I expect you to chin the bitch. It’s the Who Goes There Podcast episode 45! 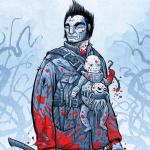 Last week, Image comics released some sweet image teasers for a new comic series from Justin Jordan and Kyle Strahm called, The Spread. Justin Jordan has said the series “could be described as Lone Wolf and Cub in a world eaten by John Carpenter’s The Thing”. Yesterday, Image also sent out a press release giving us a look at what we can expect on July 9th, from what is bound to be my new favorite comic. Continue reading for the images and synopsis. END_OF_DOCUMENT_TOKEN_TO_BE_REPLACED