Donate blood, sell your kids, and start hookin’, because you need to pick these up, and pick up a couple extra for Jorge and I! END_OF_DOCUMENT_TOKEN_TO_BE_REPLACED 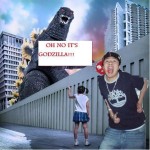 Today, Warner Brothers Pictures released a new international trailer for what will arguably be the biggest of summer blockbusters: Godzilla!

For those of you living under a rock for the last 60 years, Godzilla is an amphibious monster who emerges from the depths of the ocean after years of hibernation, only to meet a new world and the awakening of an ancient enemy.

END_OF_DOCUMENT_TOKEN_TO_BE_REPLACED

Godzilla is back in the first full-length trailer for the upcoming reboot of the classic Japanese horror-film franchise, which began with the original 1954 movie.

The remake from Legendary Pictures and Warner Bros., which hits theaters on May 16, is not the Godzilla franchise’s first reboot. A 1998 film pulled in $379 million at the global box office, but was widely panned by critics.